Dr Michael Wu has been performing Varicose Vein Surgery in Melbourne for over 15 years.

What are varicose veins? 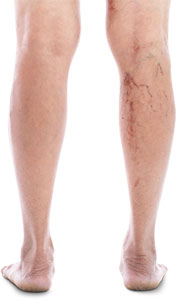 Varicose veins are enlarged, swollen and twisted veins that most commonly developed in legs. They can be worse during or after pregnancy, or if you are overweight and have high blood pressure. While they can be uncomfortable and won’t look appealing, they don’t usually cause any serious health problems. Varicose veins are usually hereditary, running in families.

Veins are responsible for carrying blood to the heart and they are equipped with valves, allowing blood to flow only in one direction. The valves in the legs are responsible for pumping the blood an extra distance and problems occur when the valves become weak and don’t close properly. As a result of this, the blood flows backwards and pools in the veins, which causes the valves to become weak over time under the pressure and become enlarged and bulging in appearance – what we call varicose veins.

How can varicose veins be treated?

Varicose veins can be treated in a number of ways, but only surgery can fully resolve the problem. Once you have your vein removed, there won’t be any effect on the blood circulation, as the blood will flow through other veins instead. Generally, the problems are caused by the valves in the two large veins that run along the length of your leg, just under the skin.

Varicose vein surgery is normally performed under general anaesthesia, which means that you are unconscious during the operation and it usually takes about an hour to operate on one leg. Before the surgery, health professionals will mark the varicose veins with a waterproof pen to have clear directions where they are. During surgery, the varicose vein is taken out through a cut in the groin or the back of the knee.

To fully remove the entire vein, it is usually necessary to make several small cuts along the length of the leg, where the marks are. Then the top end of the faulty skin vein is tied off to stop blood from flowing through it – this is known as ligation. A thin wire is then inserted into the vein and passed down to knee level. At knee level, another incision is made and the vein (with the wire running through it) is pulled out. This process is called stripping.

What happens after varicose vein surgery?

After the surgery is completed, the cuts are stitched and covered with a dressing. The larger cuts are closed with a stitch, which lies beneath the skin and therefore doesn’t need to be removed. The smaller cuts are not stitched because they heal well by themselves. The leg is bandaged firmly from toe to groin at the end of the operation to avoid bruising.

Some important things to remember after your surgery and during your recovery is to try and keep your legs elevated whenever you are resting.
After about 4 weeks, depending on the number veins removed you can expect to return to your normal daily routines

While they may be unsightly, they usually don’t cause any long-term medical problems. In some cases, varicose veins can lead to ulcers or sores on your legs, blood clots, or chronic inflammation. If you have a severe case, your veins could rupture.

Is treatment for my varicose veins essential?

If you have developed complications of varicose veins then it is advisable to proceed with treatment. This will halt the process that has caused the complications and will give the best chance of reversing any changes that may have taken place in the skin or tissues of the leg.

Contact us to learn more about Varicose Vein Surgery